TCM has no problem establishing itself, year-round and annually, as the best movie network on TV. But every once in a while, in addition, it branches out into what might as well be called Turner Classic Television, by unearthing, polishing and presenting a long-lost TV treasure. Here comes another one...

It’s a live TV production of Wuthering Heights, aired on May 9, 1958 as a 90-minute presentation of DuPont Show of the Month. It was first seen then –- and last seen then, too.

Long presumed lost, this TV incarnation of the Emily Bronte novel, starring Richard Burton and Rosemary Harris, was tracked down recently by Jane Klain, director of research at the Paley Center for Media. Two years ago, her detective work resulted in another TCM premiere of a lost classic: 1966’s The Glass Menagerie, starring Shirley Booth and Hal Holbrook. TCM showed that one 50 years to the day after its original telecast.

Wuthering Heights will be shown on TCM Friday night at 8 p.m. ET, televised for the first time in 61 years – another triumph for what I call, even if they don’t, “Turner Classic Television.”

“It all came from Jane,” Charles Tabesh, senior vice president of programming at TCM, told me Wednesday, laughing. “She knows where a lot of these things are hidden.”

This DuPont show was produced by David Susskind, written by James Costigan (whose later credits include Eleanor and Franklin and F. Scott Fitzgerald and The Last of the Belles), and directed by Daniel Petrie (whose credits, notably, also include Eleanor and Franklin). It stars Richard Burton, five full years before he co-starred with Elizabeth Taylor in Cleopatra, as Heathcliff; and Rosemary Harris, a last-minute substitution for actress Yvonne Furneaux, as Cathy. Cathy as a child, in flashbacks, is played by Patty Duke, four years before she played Helen Keller in the movie version of The Miracle Worker.

Klain explained to me that Rosemary Harris was offered the Show of the Month role of the adult Cathy at the start, but passed on the opportunity because she already was in rehearsals for another live TV production, the George Schaefer-directed Dial M for Murder. Harris recommended Yvonne Furneaux for the role instead, but when Susskind became so disenchanted with Furneaux that he fired her, so late into production that the “Close-Up” description in that week’s TV Guide still credited her as the leading lady: 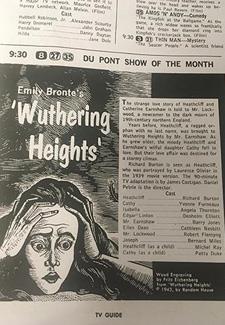 Instead, Susskind, according to Klain, went back to Harris, said she was responsible for his current dilemma, and insisted on her playing the part opposite Burton. She did so –- even though in some of the scenes she kept her script just out of camera view to check on her lines.

Regardless of the behind-the-scenes drama, the on-the-screen drama is something to watch –- and this is the first time since the Eisenhower administration to do so. “We love to do that,” Tabesh said. “To bring back things that even the hard-core people haven’t had a chance to see. They’ve never seen this.”

Tomorrow night, they –- and that includes you and me –- can do just that. After more than six decades, there’s no moor waiting…

It turned out to be really good (though a little Burton goes a long way :-)

Return to “Books, Movies and Other TV”