HOUSTON — George Herbert Walker Bush, the president who managed the end of the Cold War and forged a global coalition to oust Iraqi forces from Kuwait, has died at age 94. In a political career that spanned three decades, he lost his bid for re-election and lived to see his son win the Oval Office.

The death of Bush — nicknamed "41" to distinguish himself from son George W. Bush, "43" — was announced in a statement released late Friday.

"Jeb, Neil, Marvin, Doro and I are saddened to announce that after 94 remarkable years, our dear Dad has died," his son, former President George W. Bush, said in a statement released by family spokesman Jim McGrath. "George H.W. Bush was a man of the highest character and the best dad a son or daughter could ask for. The entire Bush family is deeply grateful for 41's life and love, for the compassion of those who have cared and prayed for Dad, and for the condolences of our friends and fellow citizens."

Bush's death comes months after the passing of his wife of 73 years, Barbara. The former first lady died in April.

Bush bristled at the term "dynasty," but his family defined the term. He was the son of a senator, Prescott Bush of Connecticut, and the father of Jeb Bush, the two-term governor of Florida, and George W. Bush, the two-term governor of Texas who went on to win two terms as president. Only the founding Adams family, John and John Quincy, can also claim both father and son as presidents.

The elder Bush entered the Oval Office with the longest political resume of any president in modern times: congressman. United Nations ambassador. Republican national chairman. U.S. liaison to China. Director of the CIA. When he lost the GOP presidential nomination in 1980 to Ronald Reagan, the former California governor and primary foe offered him the vice presidency, a role he filled for eight years before winning the top job himself in 1988 over Democrat Michael Dukakis.

But Bush's bid for a second term in 1992 was rebuffed by voters who weren't convinced he understood the economic anxieties in their lives, choosing Bill Clinton instead.

George Bush moved home to Houston, where he and wife Barbara became familiar figures at Astros games, local restaurants and fundraising galas for cancer research, literacy and other favored causes. He oversaw the building of the George Bush Presidential Library and Museum on the grounds of Texas A&M, in College Station. And he determinedly rejected efforts to analyze his role in history, declining even to write the sort of memoir that has become the lucrative last word for past presidents.

"I don't want anyone to pay attention to me," he said in an interview with USA TODAY in 1997, a few days after he parachuted out of an airplane, just to prove that, at age 73, he could. "I'm confident that historians from one perspective or another are going to write and say what they think and then there'll be a merge of a judgment of our administration."

He added with a smile: "I think history's going to be relatively kind."

"Especially after his presidency, Bush came to be seen as a real human being and, instinctively, Americans felt good about him," he said.

The coarsening of the American political debate and the fierce polarization of Washington in recent years has created among some a nostalgia for the Bush era. His presidential campaigns were hard-fought and sometimes negative, but it was still a time when bipartisanship wasn't seen as a distant memory. In recent years, the rise of Donald Trump tested Bush's lifelong allegiance to the Republican Party: In 2016, he cast his presidential ballot for Hillary Clinton.

I never liked his policies, but what his mom taught him about not bragging sure sounds refreshing right about now!

And just to remind us all what NORMAL sounds like, here's a note that GHWB left for Bill Clinton in the Oval on the day of Clinton's inauguration. This example of a more civilized period in our recent history has now become new goal to strive for. 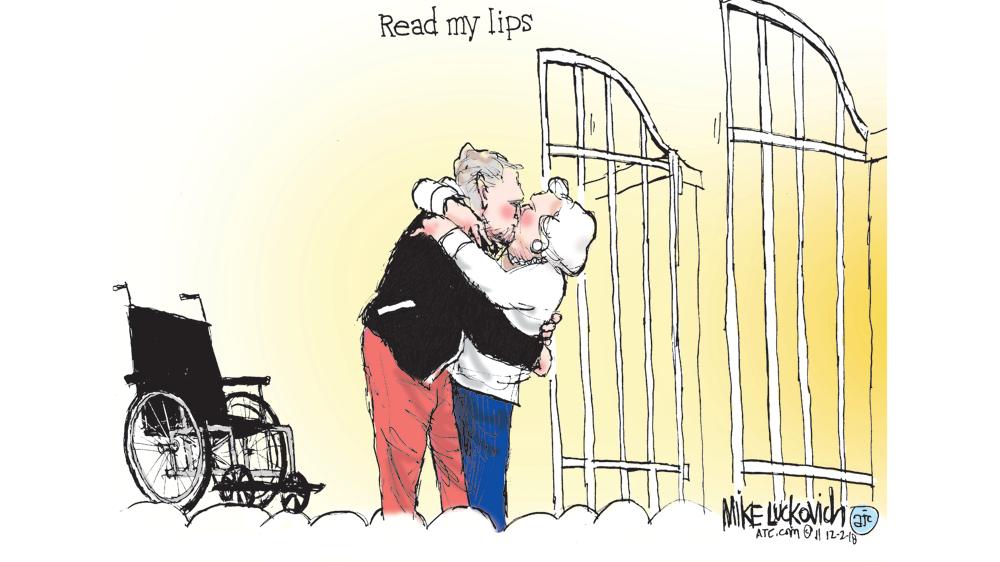